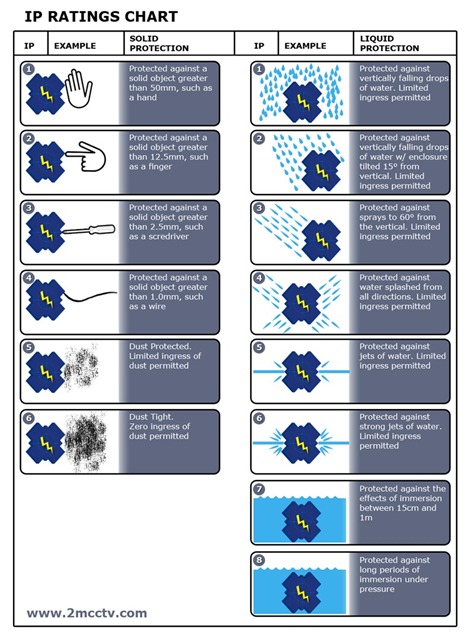 IP CODE
The IP Code (or International Protection Rating, sometimes also interpreted as Ingress Protection Rating)* consists of the letters IP followed by two digits and an optional letter. As defined in international standard IEC 60529.  It classifies the degrees of protection provided against the intrusion of solid objects (including body parts like hands and fingers), dust, accidental contact, and water in electrical enclosures. The standard aims to provide users more detailed information than vague marketing terms such as waterproof. The digits (characteristic numerals) indicate conformity with the conditions summarized in the tables below. For example, an electrical socket rated IP22 is protected against insertion of fingers and will not be damaged or become unsafe during a specified test in which it is exposed to vertically or nearly vertically dripping water. IP22 or 2X are typical minimum requirements for the design of electrical accessories for indoor use.
The first digit indicates the level of protection that the enclosure provides against access to hazardous parts (e.g., electrical conductors, moving parts) and the ingress of solid foreign objects.
The second digit indicates the level of protection of the equipment inside the enclosure against harmful ingress of water.
View on Mobile